First, check out our abridged history of gambling in the State of Illinois!

Then & Now: A History of Gaming in Illinois

Then, learn the differences between casino slot machines and Illinois video gaming terminals. 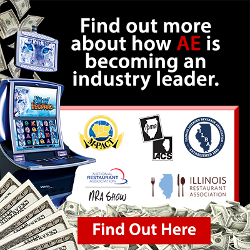 Although jurisdictions all over the world have slot machines, the appearance of machines and how they are monitored varies depending on where they are located. When it comes to video gaming terminals (“VGTs”) in the Illinois video gaming market, there are many similarities between VGTs and the slot machines found in the ten casinos throughout the State. However, notable differences can also be found.

Why Municipalities Should Allow Video Gaming

Here at Accel Entertainment, we frequently discuss why establishments should consider adding video gaming to their establishments. While this is obviously worthwhile subject matter, Accel also likes to focus on why Illinois municipalities should opt-in to video gaming. The main reason is that it can help local businesses and generate additional tax revenue that can be used for local improvements.

Following that, review the process of joining the Illinois video gaming industry!

How to Start a Video Gaming Business from Scratch

As with any other business, getting a licensed video gaming establishment in Illinois off the ground requires an investment. But when you’re starting with little more than a dream to get into this new and growing industry, the investment involved is not only one of funds, but also of time and education. You’ll be learning about the ins and outs of video gaming as you’re jumping through the regulatory hoops, and also doing the typical tasks associated with starting a new business — from finding the best possible location to hiring your staff.

Now that you have a video gaming business, find out how to access your IGB data!

How to Access Revenue Information from the Illinois Gaming Board

Since the implementation of the Video Gaming Act, authorizing bars, restaurants, truck stops and other locations to have Video Gaming Terminals (VGTs), the State of Illinois has realized significant revenue over a relatively short period of time.

Finally, learn about the latest revisions to the Video Gaming Act!

Updates to the Video Gaming Industry in Illinois

Illinois lawmakers recently passed sweeping legislation significantly expanding the Illinois gaming market. Of course, the timelines for most of these changes are still being determined.  The Governor first needs to sign the bill, and then the Illinois Gaming Board (“IGB”) will need to write rules to implement many of these changes.  It could be several months or years before certain sections of the legislation go into effect.