The Illinois Video Gaming Act became law on July 13, 2009,
regulating the use of video gaming terminals (VGTs or slot
machines) in licensed establishments in Illinois. The legislation
initially allowed for up to five VGTs per licensed establishment.
In June 2019, Illinois lawmakers passed sweeping legislation
significantly expanding the Illinois gaming market. Among
other changes, the law now permits up to six VGTs per licensed
establishment and up to ten VGTs at specially-licensed large truck
stops. 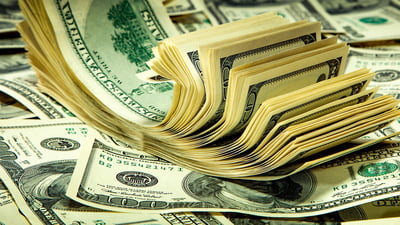 What is Your State-Determined Cut of the Profits? 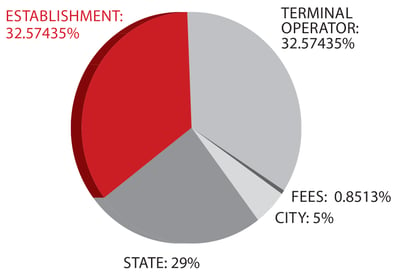 Net Terminal Income (NTI) is defined as the money put into a VGT minus the credits paid to the player. The State receives 29% of the NTI generated from each licensed VGT (of that, 5% goes to the local municipality). Of the remaining 72% of NTI, a company called Scientific Games receives 0.8513% as compensation for maintaining the Central Communications System (CCS), which all VGTs connect to. Finally, the remainder is divided equally between the Terminal Operator (who owns/leases and places the VGTs in locations) and the Licensed Location.

It doesn’t matter if you’ve been in the slot machine industry for years or you have no experience, there are MANY terms to know and understand. For instance, one source of confusion is what to call the actual industry. Is it video gaming? Is it video gambling? Video slots? Slot machines? Truth is, it just depends on the person(s) talking about it. For instance, the IGB refers to it as video gaming (hence, the Video Gaming Act). But, if you are talking to a person that plays the VGTs, most likely they are referring to them as video slots.

How to Secure Your License to Run a Slot Machines Business

If you’re new to gaming and wondering how to get started with VGTs, you’ve come to the right place. We’ve outlined some of the most important steps you’ll need to take if you’re looking to add video gaming to your location: 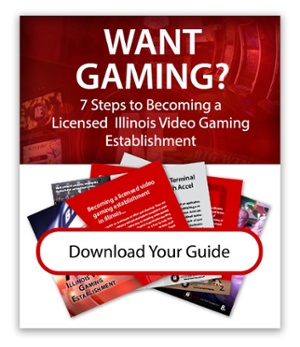 Now that you’ve applied for an Illinois video gaming license, it’s time to start thinking about where your slot machines will go within your establishment. The placement of your video gaming machines can directly influence how successful you are. Once you’re licensed and ready to go, the last thing you want is lost revenue due to distraction or a poorly planned gaming room.

There are certain things you need to be aware of when designing space for your VGTs, and a few of them are required by law.

From our experience of designing and redesigning gaming rooms, we know what layouts contribute to a successful gaming environment. For instance, privacy can make players much more comfortable, as well as nice chairs and a non-drafty space that’s not too noisy.

Call us today and our game room design specialist will re-design the space with no obligation from you! 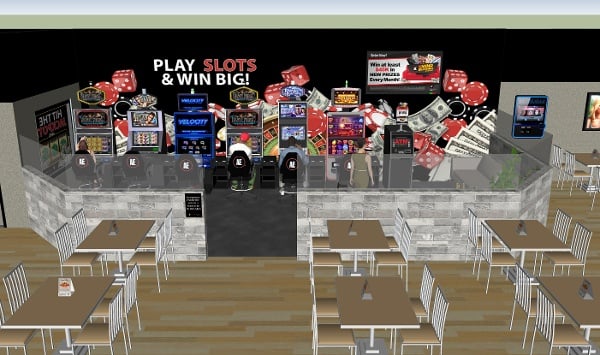 There is an art to staffing your video gaming business, and it can be more intricate that you might think. First, hiring the appropriate staff is really important. Whether that means hiring responsible and friendly bartenders, or a dedicated gaming manager, you need to make sure that they are ready and able to perform the functions when it comes to a slot machine area.

Your video gaming application requires that you name someone to be a video gaming manager.  If a lot of your business will be focused on gaming, hiring a dedicated person to serve in this role is a great idea. This person would work with your Terminal Operator and manage license renewals. He/she might also manage social media and marketing efforts, customer engagement and promotions.

Staff training will be key once you get slot machines and your Accel Relationship Manager is instrumental in providing you this information.

A few pointers to keep in mind for training:

How Long Does it Take to Get Slot Machines

The process for getting licensed as an Illinois Video Gaming Establishment can be a long process, in part depending on your ownership structure. With any licensing process, it’s difficult to determine the exact amount of time it will take to complete. You should not expect to have VGTs immediately after applying. In most cases, you can expect the process to take about 2-3 months. However, certain steps can take longer than others and delay your location going live with video gaming.

So, how can you prevent delays in the process?

Talk to one of our experts about adding gaming machines to your establishment today.