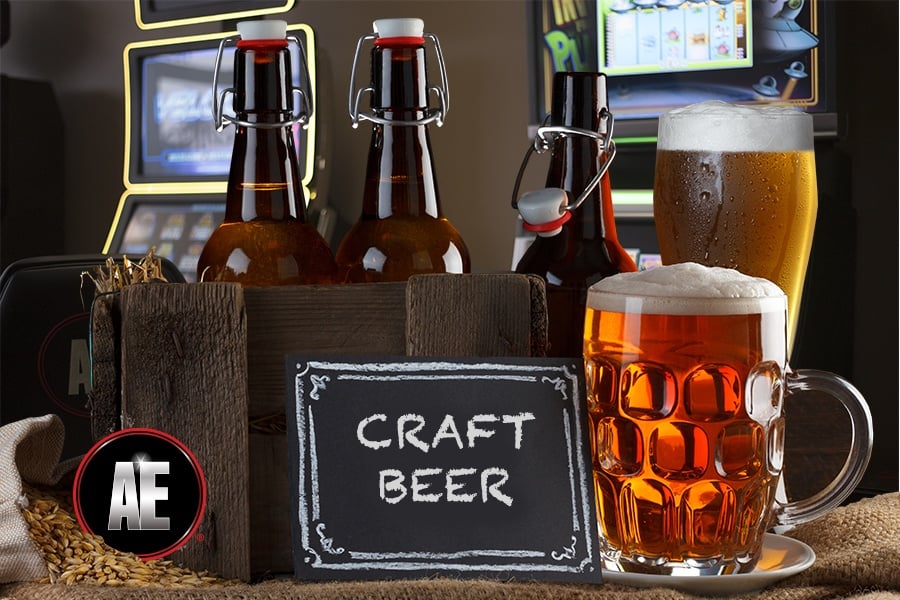 Are You Serving These 4 Types of Microbrews in Your Bar or Restaurant?

If you have an Illinois video gaming license, we’re going to assume you have a liquor license (unless you’re a truck stop), which means you’re most likely serving up some cold ones for your patrons. It’s easy enough (and at times, cheaper) to order a bunch of the same product for your customers, since most will find something they enjoy. However, if you’re looking to expand your microbrew selection to invite craft beer enthusiasts to your establishment, you’ve come to the right place to learn more.

The craft beer scene has exploded, especially in the last ten years. According to The Brewer’s Association, “the number of craft brewers has gone from eight in 1980, to 537 in 1994, to over 6,000 in 2018.” That means that your customers are likely looking for variety and preferably, something local. We’ve put together a very short list of some craft brews you can start offering to your customers (and hopefully bring in some new ones, as well)!

According to The Spruce, the American Pale Ale is the style of beer that inspired the American craft beer scene. Pale ales are best known for their hops, malty flavor and light color. Your beer drinking customers will love this for its clean, crisp and oftentimes citrus-y flavor (from the hops).

Why you should carry it: It’s what most people would equate with American craft beer and can typically satisfy a lot of customers with its versatile options.

Pairings: Wide range of food, but it’s great with a burger!

Local Breweries with great Pale Ales: Goose Island Green Line, Half Acre Daisy Cutter, Three Floyds Zombie Dust (yes, this last one is an Indiana brewery, but it’s included in this list because it’s that good).

India Pale Ales (IPAs) are known for their hoppy and aromatic flavor and tend to have a slightly higher ABV than a typical light beer (about 5.5% to 7.5%). The style was initially created to transport between England and India (hence the name).

Why you should carry it: According to CraftBeer.com, IPAs are the top-selling craft beer style in supermarkets and liquor stores across the U.S. There are some really unique and creative IPAs to try.

Stouts (or Porters) are the darkest beer options, where the malt is deeply roasted, giving it a dark brown to black color. Since this type of beer can vary on flavor profiles, you should offer more than one option.

Why you should carry it: You’re most likely already selling some kind of stout, like Guinness, but there are many other options to introduce to your patrons . These beers are especially

popular in the colder months, but there are lighter stout options that are tasty any time of year.

Pairings: Smoked and barbecued meat, and any chocolate, peanut butter or espresso dessert.

Ah, cider. The crisp, sweet (sometimes dry) alternative to beer that allows gluten free and non-beer drinking customers the option to sit and have a cold one with their friends. Cider is made from the fermented juice of fruit (typically apples but can vary greatly). North American cider differs from the rest of the world in that it encompasses a wide array of flavors and acidity.

Why you should carry it: It’s a great option for customers that either do not like the taste of most beers or are unable to consume beer for dietary reasons.

If you’re looking to completely nerd out on the beer terminology, we found this guide extremely helpful.

What are some of your favorites on or off this list?