Accel Entertainment is proud to support this important cause.

Folds of Honor and Accel Entertainment

Accel Entertainment has made supporting military veterans a priority for our company. Whether it's by employing men and women who served in our armed forces, or by supporting organizations and charities that help serve America's veterans.

In 2018, Accel began a partnership with Folds of Honor, a non-profit organization that provides educational scholarships to the spouses and children of America's fallen and disabled service veterans. 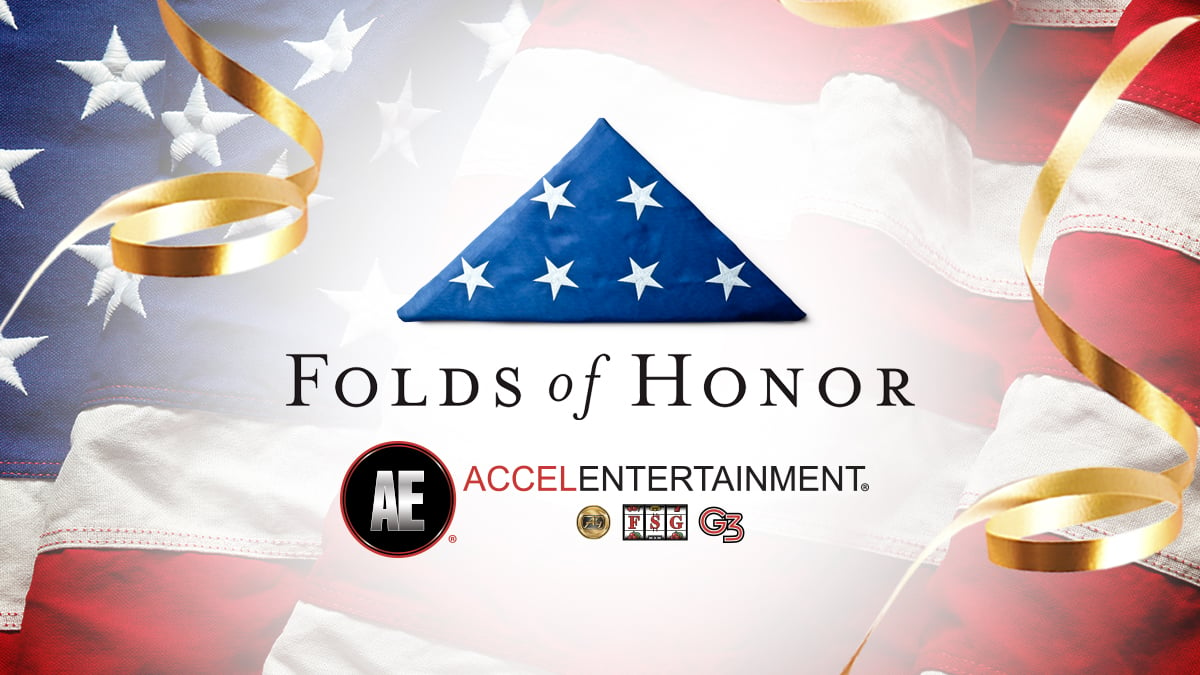 Since 2007, Folds of Honor has pursued a mission to provide educational scholarships to spouses and children of America's fallen and disabled service members. Their motto perfectly captures this mission: Honor Their Sacrifice. Educate Their Legacy.

How did Folds of Honor start? Below is a story taken from their website that describes how the organization began.

Returning home from his second tour of duty in Iraq, Major Dan Rooney, an F-16 fighter pilot in the Oklahoma Air National Guard, became painfully aware of the reality families face when a loved one in uniform is fallen or disabled.

As his flight landed, the pilot announced they carried the remains of Corporal Brock Bucklin on board, asking all passengers to respectfully remain seated while his casket deboarded.

Major Rooney watched as Corporal Bucklin’s twin brother walked somberly alongside the flag-covered casket to meet his family. Among them was the deceased Corporal’s young son, Jacob. Major Rooney ached as he thought of his own wife and little girls. Seeing the other side of war through the eyes of Jacob, was life-altering.

Sadly, over half the passengers had disregarded the pilot’s request and deboarded. Major Rooney decided he had to do something. Not only would he pay tribute to American service-members and their families, he would live as a reminder among civilians that it is our duty to honor the sacrifices of those who preserve the freedoms we so easily take for granted.

Major Rooney committed to spend his life changing the future of America’s grieving spouses and children. In 2007, he formed the Folds of Honor Foundation; a 501C-3 nonprofit organization dedicated to providing educational scholarships to the families of these heroic Americans.

Here is how Folds of Honor explains the significance of their logo:

In the folded flag we see the heavy price of freedom.

Yet it’s also a symbol of hope, representing the enduring ideals that make this country a beacon of democracy. We chose this logo because it reflects our mission – to honor the sacrifice of America’s heroes, while giving hope to the bearers of their legacy.

Folds of Honor has grown from a vision into a movement. This folded flag is a constant reminder of those who have paid the ultimate price for our freedom. It inspires us to help equip and educate their loved ones in need of our support. Thank you for embracing the call.

How Can You Help?

If you're interested in helping out Folds of Honor (and we highly encourage you to do so!), head over to the Folds of Honor website. You can make a one-time donation, a recurring donation or even host your own fundraiser to help the cause.