“There was no downtime at all… it was maybe an hour."

Pete Klementzos, owner of the Lyons, Illinois-based restaurant and banquet hall P.J. Klem’s, knows that staying true to your commitments goes a long way in a business partnership. Klementzos, who opened P.J. Klem’s in 1984, added video gaming to his restaurant in 2013. He switched his terminal operator to Accel in July 2017.

"My overall experience with Accel is superb,” he says. “I highly recommend them to anybody."

This testimonial features certain detail about the Illinois gaming market that, while accurate at the time of filming, may not reflect current policies. 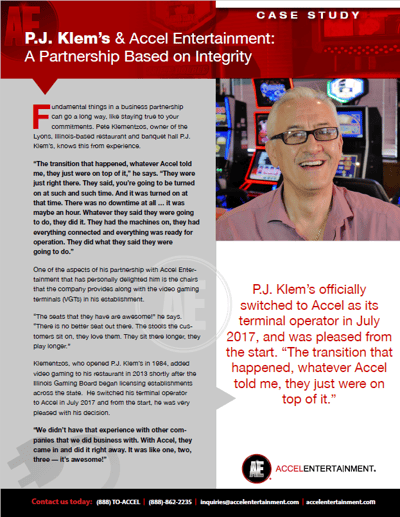 Klementzos, who opened P.J. Klem’s in 1984, added video gaming to his restaurant in 2013 shortly after the Illinois Gaming Board began licensing establishments across the state. He switched his terminal operator to Accel in July 2017 and, from then on, he was very pleased with his decision.

“We didn’t have that experience with other companies that we did business with. With Accel, they came in and did it right away. It was like one, two, three — it’s awesome!”

Hear More About the Advantage of Switching to Accel

My name is Pete Klementzos, I am the owner of P.J. Klems Restaurant.  We are located in Lyons, IL. We’ve been in business for over 35 years. We opened up the restaurant in 1984. We have gaming entertainment in our business for the last 5 years.  July of 2017, we transitioned to a new company called Accel Entertainment and they’ve been great with us.  The revenues have increased around 54% and it’s great.  3 months after they came in they brought new games in. They also adjusted all our machines for the customers, they have more space for them.  They put new games, in which, we didn’t have that experience with other companies that we did business with.  With Accel, they came in and did it right away.  It was like one, two, three, it’s awesome!

The service team at Accel is a bunch of professional people.  I meant it’s just great. I mean no complaints.  They come in and do their job, they fix their thing and do whatever they have to do.  Before they leave, they want to make sure they want to say goodbye to me or they want to say to me that everything is okay.

Right away, when they first came in they did a whole bunch of stuff for me.  They put those soft posters up in our windows.  They just did what they said they were going to do.

Well it’s always great to have a Relationship Manager, because you can always call them.  That’s what I do every time I need something I just call if I can get a hold of anybody else I call the relationship manager and he responds to it right away. Most of the time, 99.9% he answers the phone no matter what time I called.

The spacers that was put in, it is, it is, they’re great.  The reason their great, because somebody can put their purse, they can put their drink right there.  They can put whatever any personal thing that they have. When they eat here, they want to put their food to go there, they can put the boxes, so they don’t put it anywhere else it’s right there so they can leave.  And the seats that they have are awesome!.  There is no better seat out there yet. The stools that the customers seat.  They love them. They seat there longer, they play longer. I mean there’s times when we close up that I go there and I sit on the chairs because I like the way they fit.

The transition that happened, whatever Accel told me, they just were on top of it.  They were just right there. They said, you’re going to be turned on at such and such time.  And it was turned on at such and such time. There was no downtime at all it was maybe an hour or whatever it was. Whatever they said they were going to do, they did it.  They had the machines on there, they had everything connected and everything was ready for operation.

My overall experience with Accel is superb.  If it keeps up this way, the way it is right now, I am not planning on getting on a different entertainment center, you know a different company to come in, but Accel.  I highly recommend to anybody that’s listening, if anybody what’s to switch with anybody they should go to Accel because that’s the company to be with.